For the 5th round of the Russian Premier League, Spartak Moscow will host CSKA in the derby of the capital. Spartak didn't start the season well against Ufa, but went on to win 3 straight games over Krasnodar, Rubin and Krylya Sovetov. CSKA started very confidently, having a flawless campaign so far; securing wins over Rubin, Krylya Sovetov, Anzhi and Amkar. Spartak's manager is gradually finding a balance between the defensive and offensive lines, depending on the opponent. Most likely he won't play Romulo against CSKA. Goalkeeper Sergei Pesyakov moved to Anzhi Makhachkala on loan.

CSKA Moscow has been challenging for the domestic title for several years and a strong start to the season was to be expected. Leonid Slutsky's side didn't enjoy the best of starts in their Champions League campaign. After a 2-2 draw at home versus Sparta Prague, CSKA got away with a strong-willed victory 3-2 in the 2nd leg. Seydou Doumbia returned after a loan spell to Roma, but it's still unknown in what form the striker is now and whether Slutsky will be using him or not. They have an important match coming up in Champions League playoffs against Sporting Lisbon, and Leonid Slutsky might consider resting some key players.

The history between Spartak and CSKA includes 56 matches. 24 won by the "Army men", 17 wins for Spartak, and 15 matches ended in draw. Last season, the teams shared 1 defeat each. Despite the fact that CSKA will soon be playing the most important match of their Champions League campaign, Footbe believes that CSKA will win this derby against Spartak. Leonid Slutsky's side need to extend their winning streak to remain at the top spot in the standings. 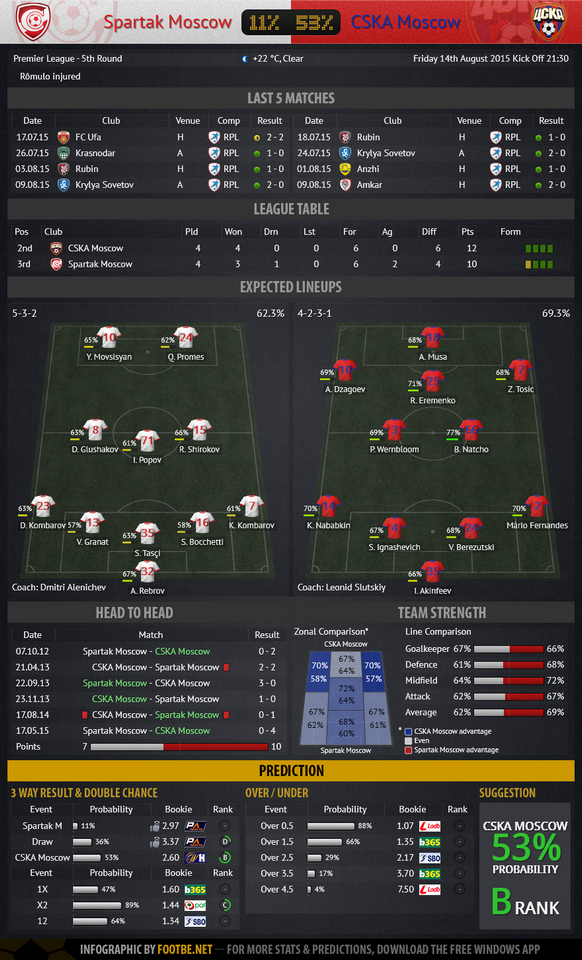