For the 4th round of Ukrainian Premier, Dnipro will host the defending champions Dynamo Kiev. The team of Miron Markevich didn't enjoy the best start in the new season. They lost points in Uzhgorod (1-1 vs Goverla), then earned a strong-willed victory over Chornomorets 4-2 before getting a draw drew against Vorskla (1-1). Yevgen Konoplyanka is no longer at Dnepr as he recently moved to Sevilla. Mateus has been brought back to the first team, but he has yet to score.

Dynamo Kiev have won all their games so far. Dneprodzerzhinsk started the season by defeating Steel 2-1, then earned wins against Marseille and Chernomorets (both 2-0). During the off-season they lost one of the leaders in Jermain Lens. However, they signed Paraguayan international striker Derlis González from Basel. The battle between the two giants of Ukrainian football promises to be intense.

It is noteworthy that over the past 7 years, Dynamo Kiev managed to win 4 times on the road at Dnipro. Overall, Kievites count up 15 victories over Dnieper. Dnipro won just 3 times, while 5 games ended in a draw. Dynamo managed to snatch an away victory over Chornomorets towards the end of the match. Another away match against an even stronger opponent is unlikely to be any less stressful. Dynamo retained their leader Andrey Yarmolenko and recruited ex-Metallurg Donetsk striker Júnior Moraes. Khacheridi and Dragovic return after serving their suspensions. Dnipro without Konoplyanka is expected to have a difficult season.

According to bookmakers, Dynamo are the favorites going into this encounter and we agree. The current national champions, who did not suffer a single defeat last season, are looking in great shape and have a good chance of winning this match. After a tough match against Vorksly Poltava, Dnipro expect another very difficult game. Miron Markevich's team plays at home and will, of course, put up a good fight against a strong opponent. Based on our statistical models, footbe recommends to bet on a draw in this match. 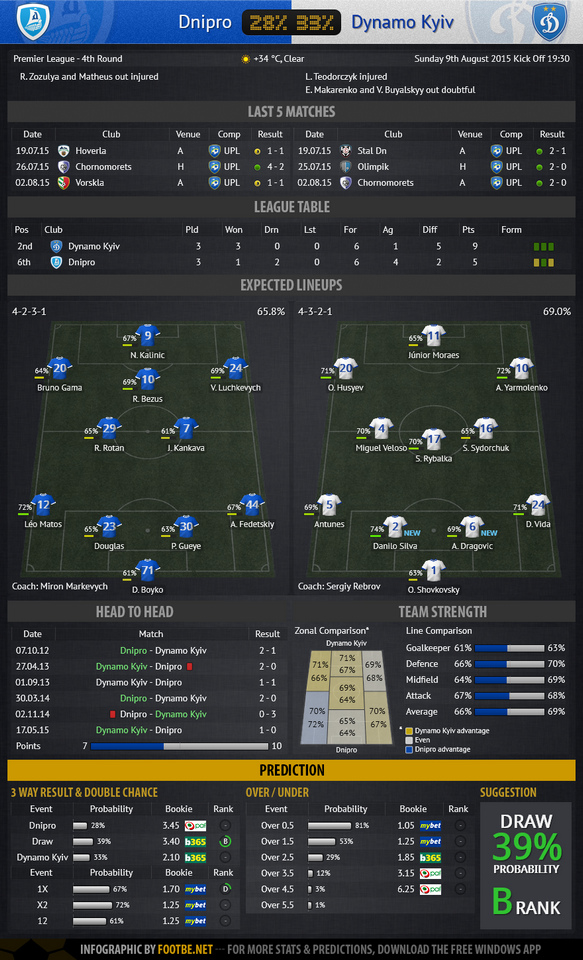